Right on the edge of the Great Plains and just an hour away from hints of the Texas Piney Woods, the Dallas–Fort Worth Metroplex is made up of twelve different counties. Broken up into two logical zones – The eastern zone or Dallas is comprised of a number of communities including Dallas, Plano, Farmer’s Branch, Carrollton, Irving, and others. The eastern zone is the most populous of the two zones. The Fort Worth or western zone is comprised of Fort Worth, Arlington, the Mid-Cities, and more. Together the east and west zones of the DFW Metroplex are by far the most populous region in North Texas. In 2008 the area was estimated to have a population of roughly 6.5 million. This makes the north Texas hub the fourth most populous region in the country. A wild blend of cultures exist here but the one trait that seems to rub off on everyone is a desire to be courteous. When you visit our region expect to hear “sir” “ma’am” and “thank you” a lot.

AVAREN is proud to serve the North Texas region and to call it our home. 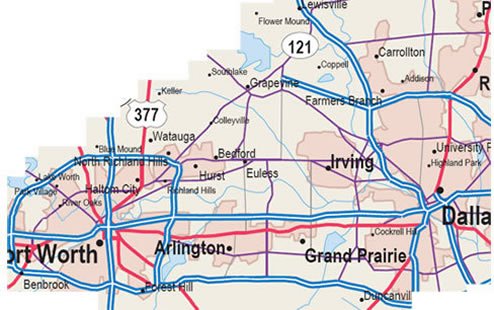