An IT veteran’s opinion on which Desktop PC to buy next.

Having worked professionally with computers and servers for over 20 years, I’ve seen a lot of computer manufacturers come and go. As things stand currently, there are really only 6 major manufacturers of desktop PCs still left. As of 2017 they were;

Which models do I buy for myself? Read on and I’ll tell you exactly which brand and models I recommend, and why. 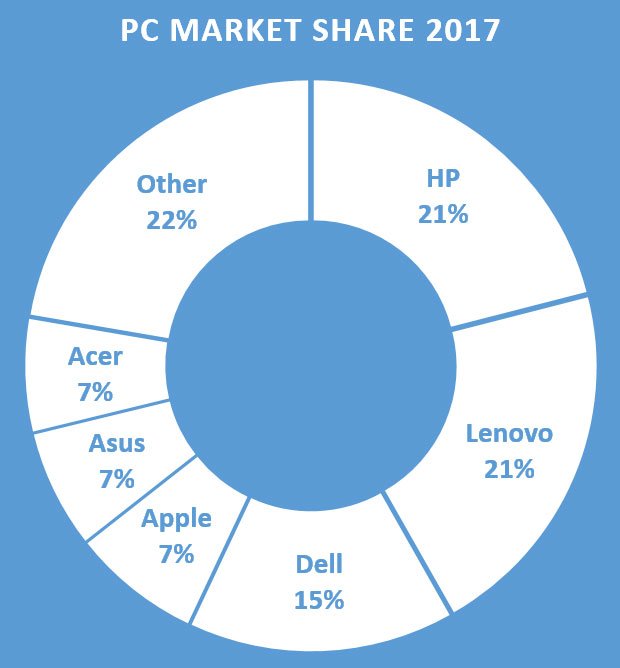 Over the years in positions of server and network analyst, I have worked with hundreds of different makes and models of computers. As a result of this experience I have definitely developed a preference. From the standpoints of cost, performance, and service, it is my opinion that the HP “Business Class Desktops” or “commercial models” are generally superior to machines offered by Dell or Acer.

Apple’s computers have always been excellent, and I hope they continue to grow their market share. Apple has always been a bastion of innovation, and certainly deserve their success. On the ground however (within the commercial enterprise), they continue to be a weak player. Apple currently has two major drawbacks in my view. First, there still aren’t enough commercial software developers developing for the Apple platform. As a result of this, Apple computers can be ideal for individual or even departmental use, but simply will not be able to perform every function your business will require. You can certainly get Microsoft and Adobe software, but don’t expect them to be able to run your favorite CRM, ERP, or custom developed package in native mode. You can run non Mac programs in a Windows virtual environment on top of the Mac, but few seem interested in this option I suppose again due to cost, not to mention that this option isn’t ideal for all software. Secondly, while Mac’s are sleek, well-built machines, they are also among the most expensive computers on the market.

Acer is largely ignored by professionals in the U.S. computer industry; in my opinion, this is because Acer has lacked the apparent stability some of the other companies have had and have thus not been able to develop brand loyalty in the U.S. ASUS has made inroads into the consumer market in the US, but we generally avoid consumer products as they aren’t going to be as reliable as commercial equipment generally.  Lenovo, being a Chinese (Beijing) concern, should likely be avoided by all US business entities. As they are in Beijing, one must assume they will do the wishes of the Communist Party in China. Lenovo has in fact been caught installing bloatware/spyware on their machines on three different occasions. As a final wrap on Apple, as you can tell I like their machines, and nothing would stop me from recommending a user carry an Apple laptop if their business infrastructure was in the cloud, or if they had a Windows desktop or office Terminal Server to connect into to run their business programs.

Let me clarify my earlier “Business Class Desktops” statement by saying that most of the major manufacturers sell different models of computers for the ‘consumer’ and ‘business’ markets. As a general rule, business machines will be more robust, will be designed and built to run and last longer, and overall will exhibit fewer problems. You may spend an extra $50-150 on a business machine but this isn’t for naught. The machines are simply a better grade, and as a result typically come with a 3 year on-site (They come to you) warranty. Compare that with the 90 day to 1 year warranties on consumer machines, often where you must mail the machine in to them. Thus, in the event that a business machine does break, the business service side of things is dreamy compared to that on the consumer side.

The models and pricing for business class machines do change over time, but as you can see in this graphic (left); they are not expensive. Shown here are a couple of “skus” from the HP Deskpro line. These are the modern equivalent of the (now dead) Compaq DeskPro business line.

It would seem that when HP and Compaq merged, the decision was made to keep the Compaq Intel business segment (now HP Enterprise) rather than the HP Intel business segment. We are fortunate that this was the case as Compaq’s American engineering programs were definitely superior. (Continue reading our Desktop Computer Brand Comparison article below-left)

To me, probably the most important factor when shopping for a desktop computer is “reliability”. Not just the reliability of the parts themselves, but also “how well do the hardware and software mesh” (i.e. compatibility)? The winner in this category is HP commercial class. Over the years, our team has experienced fewer strange issues related to Microsoft software (and or service pack installations) with the HP business computers than with any other make of computer. I’ve seen the most software issues on clones (pieced together) and Dell machines. I cannot count the number of times I’ve applied a Microsoft service release to a Dell machine and afterwards the machine exhibited unexpected issues or just simply would not boot. IBM used to come in at a close second to HP/Compaq, but since selling their PC division to the Chinese concern Lenovo, few seem terribly interested in buying them anymore. IBM had long wanted out of the PC market it seemed.

I’ve long felt that HP supports their business model machines better than any other manufacturer. IBM also offered great support, but the general experience of dealing with IBM support/parts was more of a headache than with HP. Dell offers good though more frustrating support. They seem to enjoy making you jump through hoops before shipping you a needed part or dispatching a technician. Relative to the others, HP business class shines in these areas. We should again note however that business class service is not the same as on the consumer side. With the HP business class machines, your technical issues will receive more serious attention than with any consumer model.

Both HP and Dell build fine computers. Dell’s computers, however, generally seem to be more cheaply made and their manufacturing processes seem to involve less standardization. I have on occasion had two identical model Dell machines side-by-side on the bench with entirely different motherboards in them. I have never seen anything like this with HP. I’ve learned from experience that greater standardization generally means the parts will be more reliable. I’ll take standardization over the “motherboard de jour” situation any time I can.

My experience with Dell is that they are the cheapest. They seem willing to undercut virtually any proposal in an effort to win a sale and eventual customer loyalty. Frankly this frightens me. I don’t want the cheapest thing out there when building business systems. On the consumer side, in a situation where you have two computers at home, sure – buy the cheap thing if you don’t mind the potential for occasional headaches. In a business situation, where productivity and work are lost any time there are hiccups; buy the reliable thing. That is certainly what I want as I help build businesses, even if it means a few extra bucks per machine. Relative to the other brands, HP business machines don’t break. Generally one must only blow the dust out of them periodically. This makes them nearly priceless.

It is my considered opinion that the HP business computers offer the best value when factoring in reliability, service, quality and price. After dealing with literally hundreds of computers and resolving just about every imaginable hardware or software issue during my tenure as a systems analyst, I feel that the HP business computers have generally exhibited fewer issues than any other brand of computer on the market today. Every year we buy and configure hundreds of machines. It is my sincere wish that the majority of the machines we purchase and configure for customers in the future, will be business (and specifically HP business) grade.

If you operate a business and are interested in utilizing AVAREN for technical outfitting or technology support, please call us during business hours at 214-379-4200. Thank you for reading our desktop computer brand comparison article. 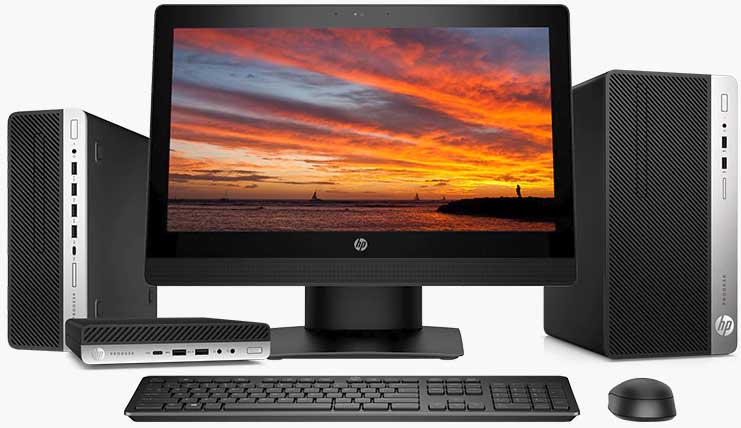